Ruth Davidson is the former leader of the Scottish Conservatives and the current MSP for Edinburgh Central.

Before politics, Ruth worked as a journalist - first in newspapers, before moving to radio and television. The majority of her time was spent at the BBC working in news and current affairs as a presenter, reporter and documentary maker.

Ruth became the youngest party leader in the UK when elected head of the Scottish Conservatives in 2011 at the age of 32. She went on to lead the party through seven national elections and two referendums in just under eight years. During that period, she led the party to its greatest result in Scotland at a general election for nearly 40 years and its best ever result at Holyrood.

Ruth is engaged to her partner, Jen, and they live in Edinburgh with their son, Finn, and cocker spaniel, Wilson. 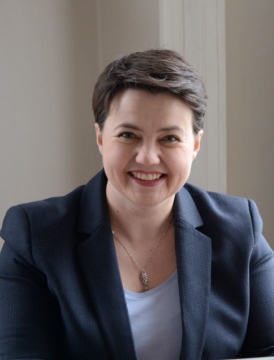