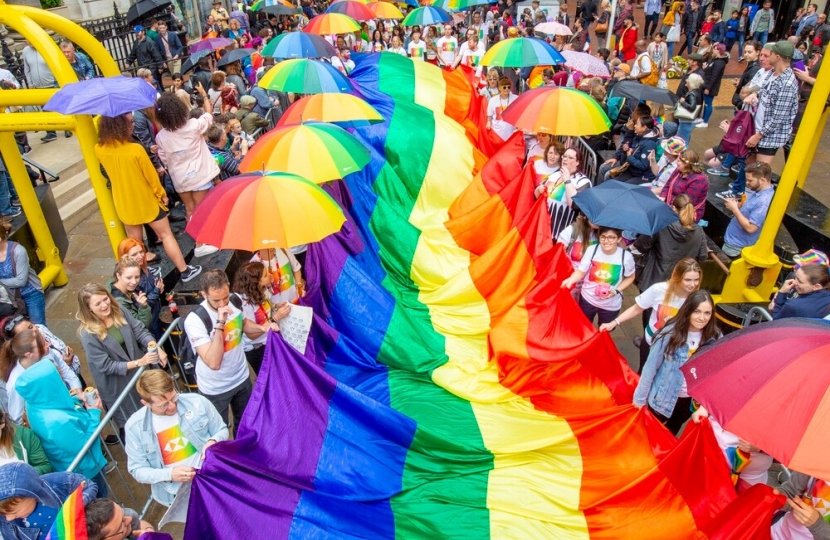 The first Birmingham Gay Pride Weekend took place on 1972, one week after the first London Gay Pride Week, itself the first Gay Pride Rally to take place outside the United States. Although "hastily arranged and not very well conceived", the Birmingham event featured dances, two "Gay Days" in Cannon Hill Park and a march up New Street from the Bull Ring, culminating in a small rally on the steps of Birmingham Town Hall. According to one of its organisers "Our aim was to announce ourselves and let Birmingham know gay people were here: ‘Here we are and here we’ll stay’. Two or three further such events were organised by Birmingham Gay Liberation Front until the organisation declined in the mid 1970s.

Annual gay festivals in Birmingham resumed in 1983 with the first "Five Days of Fun", originally known as "Gay Brum". Unlike the 1970s Pride weekends and the earlier "Gay Days", Five Days of Fun was not intended as a political statement but as a social event and celebration. Daytime and evening events would take place throughout the city's main gay bars and clubs in the village – culminating in an It's a Knockout competition between teams of the venues' staff, held in the garden/swimming pool at The Grosvenor House Hotel, Hagley Road, Edgbaston.

As Birmingham Pride approaches its 50th birthday (yes, 50 years old in 2022!!), the city is looking forward to welcoming 75,000 people to its 'Love out Loud' themed celebrations this bank holiday weekend.  The event begins with a parade from the Victoria Square in the city to the Gay Village in Hurst Street, where a festival site hosts music acts, a dance arena, funfair, cabaret and stalls.

If you haven't firmed up your plans yet, we definitely recommend taking a look at the community events hosted by the Birmingham LGBT Centre located just five minutes walk from New Street Station (no wristband required).  For everything you need to know, including a pride map, what's on and the opportunity to win a holiday to Los Angeles, take a look at the main pride website.

West Midlands LGBT+ Conservatives will be joining the parade this year to show how inclusive our party is and to celebrate the progress towards equality for LGBT+ people, and to show what this government has achieved.  We're looking forward to joining lots of other organisations taking part this year who are dedicated to widening the reach and access of their services and raise awareness of their causes for the LGBT+ community.

This year Birmingham Pride are pleased to be supporting three charities and organisations.  Any surplus raised from ticket revenues from this years festival will be awarded to St Basils, SIFA Fireside and Birmingham LGBT Centre. St Basils and SIFA Fireside work with homeless people or people who are at risk of homelessness by providing accommodation and helping them to gain the skills and confidence they need break the cycle of homelessness and experience a bright fulfilling future.