Lord Garel-Jones argues for "full recognition in the law for Humanist marriage". 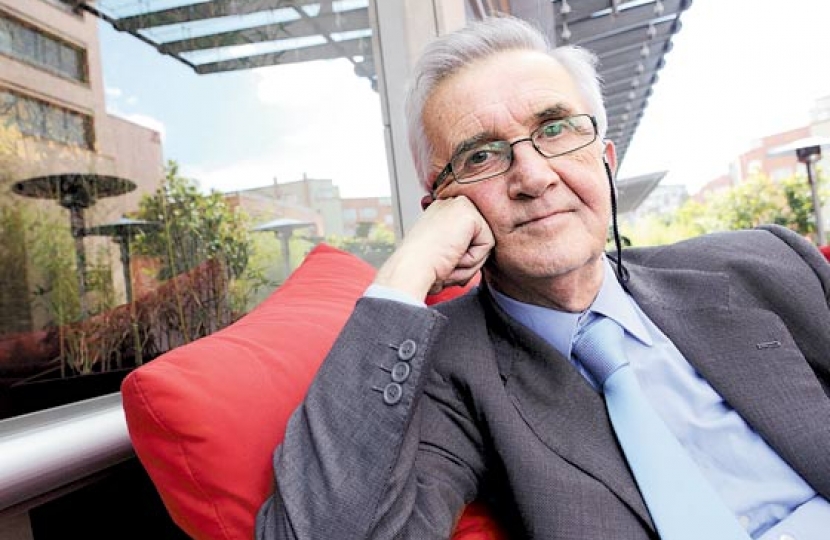 During the Committee Stage of the Marriage (same sex couples) Bill, Conservative peer Lord Garel-Jones, himself a Humanist, spoke in support of amendments which would permit same sex Humanist weddings.  You can read his complete speech here:

Lord Garel-Jones: My Lords, I support the amendment moved by the noble Lord, Lord Harrison, and the new schedule proposed in Amendment 27A.

Whenever I am asked what my religion is I reply, “I am a Church of England atheist”. I hasten to say that this is not some glib witticism, but a true reflection of my position. I do not believe in God and I am a member of the All-Party Humanist Group. However, the King James Bible, the Cranmer prayer book and Hymns Ancient and Modern are a part of my DNA. Their role in our history and their language are part of what makes our country what it is today. Consequently, when noble Lords talk about traditional marriage, I understand and respect where they are coming from.

I am a little concerned, as was my noble friend Lord Deben, that a number of religious believers in your Lordships’ House may, with the greatest courtesy, have been attempting to load up the Bill. I shall concentrate my remarks on the allegation that this amendment undermines, as it were, the whole basis of the law on marriage. As the law stands, any religion may conduct legally recognised marriages so long as they have use of a registered place of worship. Any sect of any religion that can afford a building can register it as a place of worship, and then re-register it for marriages without any obstacle whatever. In effect, provided you are a religion, you get a bisque.

Putting aside the 11 main Christian denominations—the noble Lord, Lord Harrison, made reference to this—there are almost 4,500 places registered for the solemnisation of marriage by minor Christian groups, and more than 650 by non-Christian groups. Many of these, to put it as kindly as I can, are a little eccentric. The noble Lord, Lord Harrison, referred to the Aetherius Society, which believes that gods from outer space visit the earth in flying saucers—and, yes, the Aetherius Society is registered to perform marriages.

This amendment simply proposes approval for organisations that, unlike religious bodies, which sail through unimpeded, meet a number of serious criteria. The first one in Amendment 22A—it is printed on the Marshalled List so I will not tire the Committee by reading it all out—makes a series of requirements. They must be registered charities of good repute, they must have been established for at least 10 years, the ceremonies must be rooted in their belief, written procedures must exist and so on. In other words, a simple visit from a flying saucer will simply not suffice for the humanist group. A serious list of terms and conditions is set out in the proposed new clause.

On the registration of buildings, to which the noble Baroness has just referred, I think this is a bit of a red herring. Any marriage needs to be preceded by a public notice—either banns in a parish church or a notice under Section 27 of the Marriage Act 1949. The amendment ensures not only that the place is known

but that the marriage is to be celebrated under open doors. I believe, therefore, that this objection is without substance. The proposal is organisation-based in the same way that the law already recognises the organisations of Jews and Quakers. I recognise that what we, as humanists, are seeking to do is, as it were, to slipstream in behind the Bill, which I strongly support.

In conclusion, I say with respect that the two main Christian religions in our country are in some danger of falling out of step with civil society. For example, any corporation that made it clear that women were excluded from top positions in its organisation would find itself in court. Consequently, the debate about women bishops now going on in the Church of England raises a few eyebrows in this day and age. Most young married couples are involved in family planning and yet, as I understand it, the Roman Catholic Church continues to regard this as a mortal sin.

Perhaps a Church of England atheist is not the ideal person to give advice to churches about how they should be coping with modern society. However, in the matter of same-sex marriage and humanist marriage, I believe that both of the main churches, and indeed the minority ones, are out of step with civil society. The noble Lord made reference to Scotland, where humanist marriages have now been legal for more than a decade and where there are already more humanist marriages each year than there are Roman Catholic marriages. I understand that it is predicted that by 2015 they will have overtaken the Church of Scotland itself.

Frankly, if I personally were in charge of marketing in any of our principal churches, I would be a little worried. However, that is, of course, a matter for them. The worrying thing for me is the way in which they have been able, with the greatest courtesy, to mobilise objections and amendments to this particular piece of legislation, which I strongly support.

Lord Singh of Wimbledon: On the question of religions falling out of step with civil society, religions are there to give values to society, lasting and ethical values, on which society should be based for its own good so that responsibility and consideration of others is there. I see dangers in civil society falling out of step with that guidance.

Lord Garel-Jones: With the greatest respect, I agree except that I would put it the other way around. The danger that I see for religions, particularly the one to which I feel sentimentally attached, the Church of England, is that they will fall out of step with civil society. For example, the progress that has been made over the past 100 years in rights for women is widely supported in civil society. Therefore, as I said earlier, it seems a little odd to see the Church of England debating whether women should be bishops. It is, of course, a matter for them and for their religious beliefs.

Lord Singh of Wimbledon: I apologise, but the noble Lord refers to religions—he has clarified the issue now—and gives the example of women. Women were given full equality in the Sikh religion from day one.

It is not a question of marketing. Religions and value-based systems should not go for marketing. They are offering something, and that must not go with the tide. That is absurd.

Lord Garel-Jones: As I say, I am not the best person to be advising churches on how to handle the like. However, religions evolve and have, over the centuries, evolved along with society. I would suggest that they might be wise to do so.

In conclusion, I say to the Minister that I very much hope that she will be able to give consideration to this matter. I recognise that we are attempting to slipstream behind the Marriage (Same Sex Couples) Bill, which I strongly support, and which has been strongly supported both in this House and in the other place. We also know—I think we all know this—that even with a piece of legislation of this kind, which is non-party and free vote, officials look to their Ministers for guidance. I have no doubt that if my noble friend the Minister and the Secretary of State in the other place were to suggest to their officials that they would like to find a way of accommodating humanist marriage within the Bill, they could and would do just that. I very much hope that the Government will move such an amendment on Report.

In the mean time, if I may paraphrase a lyric from Hymns Ancient and Modern, I can assure the House that we in the humanist movement,

“will not cease from mental fight”,

until we have achieved full recognition in the law for humanist marriage.