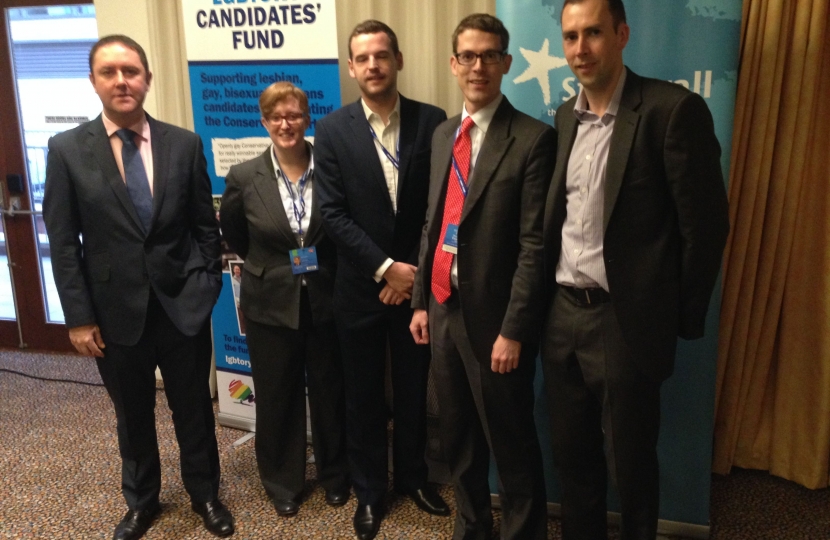 At the Conservatives' annual conference today, LGBTory, the party's LGBT group, will launch a dedicated fund to support LGBT candidates.  The Conservative Party has more LGBT MPs than all the other parties put together. With less than a year to the General Election, the fund will support a new generation of candidates in their bids to win seats in May.

The fund will provide funding, advice and support to encourage more great representatives who are backed, not only by the LGBT community, but also by local activists and, ultimately, voters.

"It's vital that we encourage and support candidates from our community to stand as elected representatives.  As we know from working with our LGBTory patrons in the Westminster and Scottish parliaments, LGBT parliamentarians are there to tackle the issues everyone is passionate about.

"LGBT people are still under-represented across all of our assemblies and parliaments, and the Conservative Party as a party of inclusion, is committed to helping them overcome any barriers to standing.  We hope to help more people than ever get elected."

Speaking at an event at conference to launch the fund Ben Howlett, the Conservatives' candidate in the target seat of Bath, said:

"I am proud that Bath has been endorsed by the LGBTory Candidates' Fund. As a former chair of the Conservative Party's youth wing I know that voters want politicians that are just like them.

"We need more LGBT MPs, but for me these funds but most importantly will help me win the seat for the Conservatives. Hard working families in Bath need an MP who will support a secure and strong economy. And this is what LGBT voters want too, as Stonewall's recent survey has shown.

David Gold, the Conservatives' first openly gay candidate when he stood for Brighton Pavilion in 2001, welcomed the new fund saying:

"In the past it was difficult for any out candidates of any party to stand for parliament. Now there are more out candidates in winnable seats than ever and the Conservatives have more lesbian and gay MPs than all the other parties put together.

I'm proud that the party which introduced equal marriage has a dedicated fund to back LGBT candidates."

To comply with Electoral Commission Rules we require your name and address, and for larger donations you may need to be a UK voter. Donations are made to LGBTory and kept in a separate bank account solely for the use of the LGBTory Candidates' Fund.