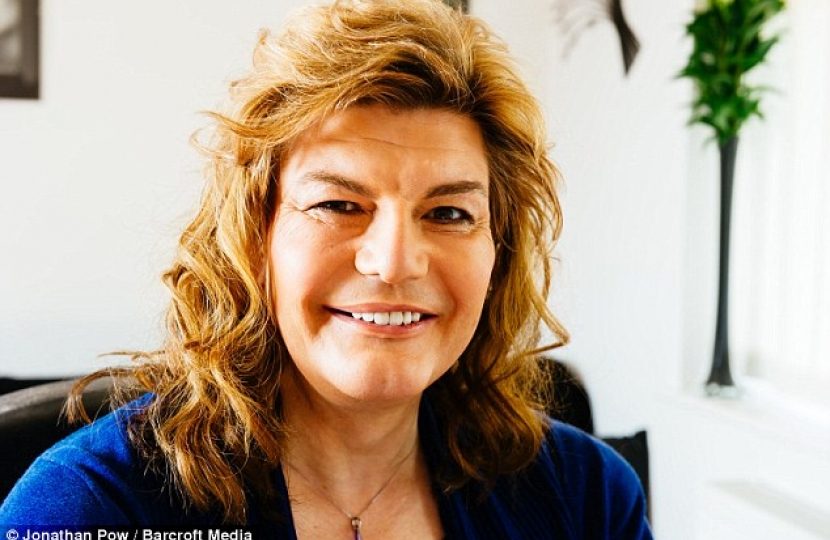 I was born with conflicting sex characteristics, some visible some not. I was assigned male at birth. I was 5 years old when I first had a sense that I was a girl. My Mum named me Susan – and at home, my Mum allowed me to be Sue.

It has taken me years to gain an understanding of the research, but I have now come to the conclusion it’s likely my mother had an hormonal imbalance while pregnant. There are many research papers that indicate the biological basis for being transgender and that also makes sense to me too.

Having a male personae outside and female one behind closed doors was a pressure. In my early 20s I sought help, but I was given something called ‘conversion therapy’. They made me feel ashamed and just tried to persuade me to bury my female identity. So I went into the world as the best person I could. I went to university as a male, but every night in my flat alone I was Sue. It was a relief when I met a woman who accepted me as I was.

My career went from strength to strength. I became partner of a very well respected accounting firm. We had a lot of money and a beautiful home. However, when my wife became pregnant with our first son, her feelings towards my identity as Sue changed. She felt that to be good parents, there wasn’t space for Sue in our lives. I needed to be seen to be male and only male.

For more than 20 years, I did my best. But in my 50s, once my children had grown up, I felt I had to explore my feminine side again. I finally told my wife I needed to seek professional help without guilt, and I needed to be honest with our children. She felt our relationship couldn’t continue and filed for divorce. Unfortunately it was very acrimonious, and included bitter disputes and the freezing of assets.

At my lowest point I was homeless, penniless, without my family and living with health problems and gender identity issues. I had lost everything. It was only then that I started living as Sue full time.

Eventually I spoke to my doctor and saved up for surgery. I went to India for my gender surgeries. The NHS could not support me without many years of waiting.

This has been a period of understanding and love from most people but extreme hate and discrimination from others for no other reason than I am transgender. It was therefore brilliant to recently hear the Prime Minister state that “being transgender is not an illness”.

Now I’m mentally strong again, I’m complete as a woman and my divorce is behind me. I am Sue now, as I was always meant to be. My gender identity and my body now fully match. I’m at peace with myself.

The challenge now is to combat the moral hysteria which has been thrown up through fear and propaganda against transgender people, and see legislative changes which support everyone’s gender identity and expression. We only wish to live our lives like any other person and be shown respect and dignity.