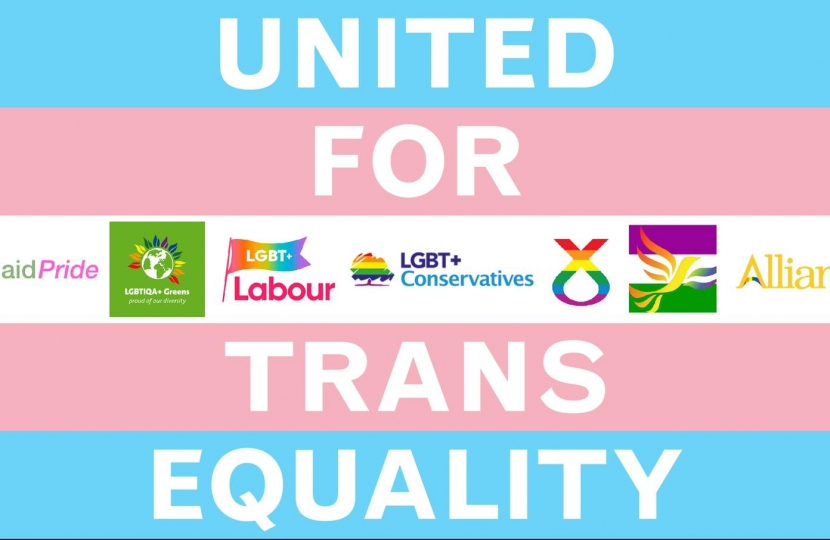 LGBT+ Groups of the Conservatives, Labour, Liberal Democrats, Scottish National Party, Plaid Cymru, Greens and Alliance issued a joint statement expressing concern, disappointment and anger at a report that emerged over the weekend regarding legal reforms for trans people:

We write together as representatives of the LGBT+ Groups of seven political parties represented in Westminster. We stand together in our opposition to any proposal to place unnecessary restrictions on trans people, hindering their ability to live freely and without fear.

It’s now nearly two years since Theresa May launched the LGBT Action Plan. There was an acknowledgement that trans people faced indignities and prejudice. We all welcomed efforts to reform the Gender Recognition Act (GRA), to remove the current costly, overcomplicated and bureaucratic process and move towards a self-declaration process - which is used, without issue, in eight countries across the world, including the Republic of Ireland.

As well as waiting for a year for the Government’s consultation to be launched, it has now been over 18 months when there has been no response from the Government. These delays have meant trans people have had to face abuse and continuous scaremongering and vilification in the media.

If recent reports in the media are correct regarding the Government’s plans for trans rights in the UK we will condemn their actions, and work cross-party in the interests of making the lives of trans people across the UK better. We are deeply alarmed that the government may be looking at restricting access to trans healthcare for young people or excluding people from the changing rooms and bathrooms of the gender with which they identify.

The proposed measures are of deep concern. We believe they would lead to the inappropriate policing of gender in single-sex spaces such as bathrooms, additional mental health needs amongst those who were unable to transition, and breed a culture of mistrust and aggression towards trans people and others who don’t meet society’s gender expectations.

Finally, we wish to register our concern about the Government’s recent statements on trans children and young people. This contrasts to the Minister’s statement that all trans adults should be “free to live their lives as they wish without fear of persecution”. Young people’s healthcare should be guided by evidence,best practice and Gillick competence. Right now practitioners in the NHS and decades of research back the current approach to supporting trans people.

We stand united across parties in our firm support for our trans siblings. The last time that the UK moved backwards on LGBT+ equality was in 1988 with the introduction of “Section 28”, which left a whole generation of LGBT+ young people without an education that recognised them. A rollback on trans rights risks repeating past mistakes.

We urge the Minister for Women and Equalities to:

“Sunday’s leak of unofficial proposals was shabby and cruel.  In the period since Gender Recognition Act reform was proposed the Government has allowed misinformation and speculation to flourish with a lack of decisive action.

An opportunity for sensible reform has soured and created a toxic atmosphere.  Many trans people now fear for their safety and future.

The Government must make clear beyond doubt its commitment to equality for all trans people.  Streamlining the GRA is welcome but it must also give assurances that it will not tinker with the Equality Act (which will negatively affect all women), and be clear about any change to the current protections for young people.

The Minister for Equalities has said that all trans adults should be “free to live their lives as they wish without fear of persecution”.  The LGBT+ groups of all major UK parties call on the Government to back that with action.”

This report includes our officers’ reports of the valued work they have done over a rather challenging year.

Unfortunately some members were unable to respond to our request for input, and this has been noted.